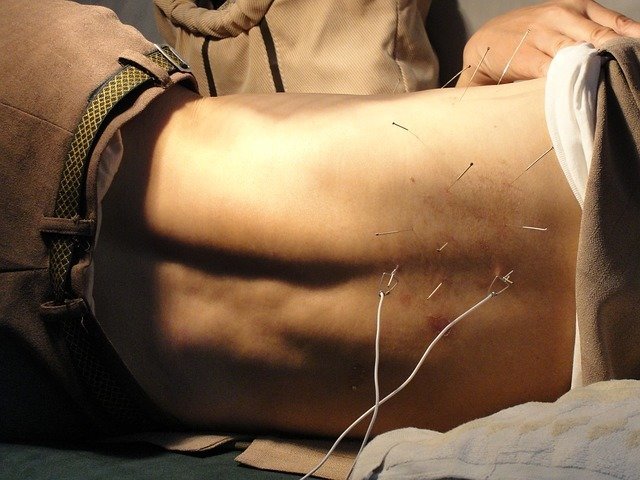 By Steven Reinberg, HealthDay Reporter MONDAY, Feb. 15, 2016 (HealthDay News) -- Acupuncture may help ease pain and improve quality of life for people with fibromyalgia, a new study suggests.Ten weeks after treatment, the pain scores of patients given acupuncture dropped an average of 41 percent, compared with an average drop of 27 percent for those given a simulated acupuncture treatment. The benefits were still seen after a year."Individualized acupuncture is a safe and good therapeutic option for the treatment of patients with fibromyalgia," said lead researcher Dr. Jorge Vas, of the pain treatment unit at Dona Mercedes Primary Health Center in Seville, Spain.Fibromyalgia patients have chronic widespread pain, which is associated with fatigue, poor sleep patterns and depression. The condition affects up to 5 percent of the population, Vas said. Between 80 percent and 90 percent of fibromyalgia patients are women.According to the study authors, nine out of 10 patients try some form of alternative therapy, such as massage or acupuncture, in addition to their regular pain medication."Both acupuncture and traditional medicine have a place in treating fibromyalgia," said Dr. Alexander Rances, an acupuncturist, pain management specialist and attending physician at North Shore University Hospital in Manhasset, N.Y."A combination of Western as well as traditional Chinese medicine probably offers these patients the best possible therapy," he said.With acupuncture, extremely thin needles are inserted through the skin at strategic body points to treat pain.Fibromyalgia treatment usually starts with medications such as the nerve pain medication Lyrica (pregabalin), and if that fails or is only partly effective, doctors might add acupuncture to the mix, Rances said.For the study, Vas and colleagues randomly assigned 153 patients diagnosed with fibromyalgia to individually tailored acupuncture or simulated acupuncture. Patients had nine weekly treatments, each session lasting 20 minutes."Although it was allowed for the participants to continue with the pharmacological [drug] treatment they were taking beforehand, when the study was finished, the patients who received individualized acupuncture were taking less medication than the group on sham acupuncture," Vas said.At 10 weeks, six months and 12 months after treatment, patients were asked about perceived levels of pain and depression and their physical and mental quality of life.One year after treatment, acupuncture patients had an average 20 percent drop in their pain score, compared with a little more than 6 percent among those who had simulated therapy, the researchers found.Scores on the Fibromyalgia Impact Questionnaire, which measures how the condition affects patients' lives, also differed between groups. Reductions were seen of 35 percent at 10 weeks, and just over 22 percent at one year, for those given real acupuncture, compared with 24.5 percent and 5 percent, respectively, for those given sham acupuncture, the researchers said.In addition, pressure pain and the number of tender points also improved more in patients given real acupuncture after 10 weeks, as did measures of fatigue, anxiety and depression, Vas said.However, although taking less pain medication, acupuncture patients were using higher levels of antidepressants after one year, which may have artificially boosted the positive results, he said.The report was published online Feb. 15 in the journal Acupuncture in Medicine.Dr. Allyson Shrikhande is a physiatrist -- a doctor who specializes in physical medicine and rehabilitation -- at Lenox Hill Hospital in New York City. She agreed that antidepressant use could have been a "significant contributing factor to their continued improvement."Still, Shrikhande said, "the findings in this study help demonstrate that acupuncture is a safe and effective treatment for chronic pain patients."Many patients with fibromyalgia have a central nervous system that is unregulated, meaning an abundance of pain signals are sent to the brain, Shrikhande said."Acupuncture can calm or quiet the nervous system and help slow down the pain signals to the brain. Acupuncture can also improve blood flow, which can improve oxygenation of tissues," she said.Some insurance companies cover acupuncture, which costs about $125 a session, according to the University of California, San Diego Center for Integrative Medicine.SOURCES: Jorge Vas, M.D., P.h.D., pain treatment unit, Dona Mercedes Primary Health Center, Seville, Spain; Alexander Rances, D.O., licensed acupuncturist, pain management specialist and attending physician, North Shore University Hospital, Manhasset, and Long Island Jewish Medical Center, New Hyde Park, N.Y.; Allyson Shrikhande, M.D., physiatrist, Lenox Hill Hospital, New York City; Feb. 15, 2016, Acupuncture in Medicine, online

Note: This article was published more than one year ago. The facts and conclusions presented may have since changed and may no longer be accurate.Copyright © 2016

Here are some question-and-answer threads from MyFibroTeam:

• Does anyone do acupuncture to help your Fibro?

• Acupuncture/ Acupressure mat? Any experience with one? Has it helped?

• Just want to know has anybody who has had acupuncture suffered from a bad flair-up after having treatment?

Here are some conversations from MyFibroTeam:

• "I am feeling pretty good. My acupuncture, yoga and stretching exercises and diet seem to be helping a lot."

• "I see my sister-in-law’s acupuncture doctor. He works on the front and back of the body, and I always get relief."

• "Physio for first time ever. He said he agrees with the diagnosis of fibro. Small soft tissue massage helped and the acupuncture helped too. Having all these things including the gym in one place is so helpful."

Has acupuncture helped ease your fibro symptoms? Share in the comments below or directly on MyFibroTeam.

Acupuncture has worked for me only time my muscles spasm is when the needles are in et my muscles go crazy but I feel better after. Sorry to hear it made your pain worse. God bless et hugs

What are you thankful for?

To determine how you can reduce your medical expenses, MyFibroTeam sat down with Susan Null of...

To determine how you can reduce your medical expenses, MyFibroTeam sat down with Susan Null of...
read article >

Because the physical impact of fibromyalgia can be all-consuming, you may be dealing with...

Because the physical impact of fibromyalgia can be all-consuming, you may be dealing with...
read article >

Fibromyalgia is a chronic condition that causes widespread pain, fatigue, and other symptoms....

Fibromyalgia is a chronic condition that causes widespread pain, fatigue, and other symptoms....
read article >

No one knows how fibromyalgia develops, but many researchers believe it involves an interaction...

No one knows how fibromyalgia develops, but many researchers believe it involves an interaction...
read article >

The cause of fibromyalgia is unknown. Some researchers believe fibromyalgia originates with a...
read article >

The path to a diagnosis of fibromyalgia can be a long and uncertain one. It takes an estimated...

The path to a diagnosis of fibromyalgia can be a long and uncertain one. It takes an estimated...
read article >

Spondyloarthritis (SpA) is an umbrella term for several types of inflammatory arthritis that can...

Spondyloarthritis (SpA) is an umbrella term for several types of inflammatory arthritis that can...
read article >

Those of us living with pre-existing, chronic conditions such as fibromyalgia have likely felt...

Those of us living with pre-existing, chronic conditions such as fibromyalgia have likely felt...
read article >