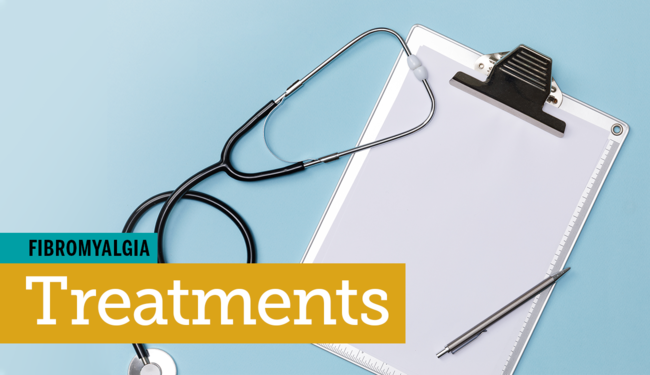 Types of Treatments for Fibromyalgia

Only three drugs are specifically approved by the U.S. Food and Drug Administration (FDA) to treat fibromyalgia. Many other drugs are not indicated for fibromyalgia but are commonly prescribed off-label to treat the condition.

Some antidepressants have been proven to help ease chronic pain, especially neuropathic pain. Of course, antidepressants can also help treat depression, another common symptom of fibromyalgia.

There are many classes of antidepressants. Two drugs in the norepinephrine and serotonin reuptake inhibitor (SNRI) class, Cymbalta (Duloxetine) and Savella (Milnacipran), have been approved by the FDA to treat fibromyalgia. The tricyclic antidepressant Elavil (Amitryptiline) and selective serotonin reuptake inhibitors (SSRIs) Prozac (Fluoxetine), Paxil (Paroxetine), and Zoloft (Sertraline) are other antidepressants frequently prescribed off-label to treat fibromyalgia symptoms.

All antidepressants work by changing the balance of neurotransmitters – chemicals that transmit nerve signals – in the brain. Each class of antidepressant works in a slightly different way. Common symptoms of most antidepressants include drowsiness and sexual dysfunction, especially for the first few weeks or months.

Anti-seizure drugs are believed to help in cases of fibromyalgia by calming overactive nerves and reducing the transmission of pain signals. Common side effects of anticonvulsants include drowsiness and depression.

Pain is the most common symptom of fibromyalgia, and it can be very severe. Pain medications range from over-the-counter pain relievers like Tylenol (Acetaminophen) to opioids available only by prescription.

Nonsteroidal anti-inflammatory drugs (NSAIDs) may work well for mild or moderate pain. Some NSAIDs such as Aspirin, Advil (Ibuprofen) and Aleve (Naproxen) are available over the counter, while Celebrex (Celecoxib) and Voltaren (Diclofenac) require a prescription. NSAIDs are believed to work by inhibiting the production of chemicals that promote inflammation and blood clot formation in the body. Taken regularly at high doses, some NSAIDs can cause gastrointestinal problems and abnormal bleeding.

For more severe chronic pain, some people with fibro require opioids such as Ultram (Tramadol). Opioids are believed to work on the brain by altering the body’s ability to perceive pain. According to the National Institute on Drug Abuse, regular use of opioids – even as prescribed by a doctor – can lead to dependence. If misused, opioids can cause overdose and death.

Some people with fibromyalgia find relief from pain by using medical marijuana, which is legal in many places.

Muscle relaxants such Soma (Carisoprodol) and Norflex (Orphenadrine) can improve stiffness in some people with fibromyalgia.

Fibromyalgia often causes problems with sleep. Medications that can help with sleep include Ambien (Zolpidem), Melatonin (a natural sleep hormone), and benzodiazepines such as Ativan (Lorazepam), Valium (Diazepam), and Xanax (Alprazolam). Benzodiazepines are also prescribed to treat anxiety.

Provigil (Modafinil) and Adderall (Amphetamine/Dextroamphetamine) are stimulants that help some people with fatigue and cognitive dysfunction.

Many people with fibromyalgia find psychotherapy helpful. Posttraumatic stress disorder (PTSD) and childhood abuse are risk factors for the development of fibromyalgia symptoms, and depression and anxiety are common symptoms of fibro. Physical and psychological pain can be closely linked. Psychotherapy can help people with fibro work through traumatic memories and find healthy ways to cope with stress. Cognitive behavioral therapy (CBT) is one variety of psychotherapy that focuses on changing thought processes and behaviors that contribute directly to physical symptoms such as pain.

There is no specific diet that helps everyone with fibromyalgia. Like everyone else, people with fibromyalgia feel better when they eat a balanced diet with plenty of fresh fruit, vegetables, and unsaturated fats. Reaching and maintaining a healthy weight is extremely important for people with fibro. Studies have shown that being overweight or obese can increase the severity of fibromyalgia symptoms and lower quality of life. Adopting a nutritious, balanced diet can make a significant difference.

Some people with fibromyalgia can benefit from dietary changes. For instance, researchers have found that nutritional deficiencies are common in people with fibro. A blood test can reveal any deficiencies, and a doctor can provide advice on what nutritional supplements will help. Other studies have found that there is often overlap between fibromyalgia and gluten intolerance, and some people with fibro feel better when they eliminate gluten from their diets. Others report reduced symptoms after adopting an anti-inflammatory diet. It is important to check with your doctor before making diet changes, since some trendy diets and nutritional supplements can interfere with medication or cause unwanted side effects.

Exercise can be difficult for people with fibromyalgia. Pain, stiffness, and fatigue lead many people with fibro to give up on exercise and become increasingly sedentary. However, lack of physical activity can actually increase pain and stiffness and contribute to the development of obesity, which exacerbates fibro symptoms. A sedentary lifestyle also promotes the development of other serious conditions such as osteoporosis, heart disease, and diabetes. Research has proven that regular exercise helps people with fibro maintain a healthy weight, keep joints flexible, and reduce inflammation and stress.

Stress is a common trigger for fibromyalgia flares, and reducing stress may have benefits for people with fibro. Deep breathing, meditation, prayer, doing yoga or tai chi, connecting with family and friends, going to psychotherapy sessions, and taking antidepressant medication are a few ways some people with fibro find relief from stress.

Some people with fibromyalgia have reported feeling better after trying various complementary or alternative therapies such as massage, acupuncture, or biofeedback.

Is There a Cure for Fibromyalgia?

There is at present no cure for fibromyalgia. The good news is that while fibromyalgia is not currently curable, it is treatable.

Article written by Kelly Crumrin Those of us living with pre-existing, chronic conditions such as...

Article written by Kelly Crumrin Those of us living with pre-existing, chronic conditions such as...
read article >

Eat healthier. Exercise more. Learn a new skill. Pay off a credit card. Many of us have made...

Eat healthier. Exercise more. Learn a new skill. Pay off a credit card. Many of us have made...
read article >

This time of the year can be overwhelming with expectations around the holidays, and living with...

This time of the year can be overwhelming with expectations around the holidays, and living with...
read article >

How to Enjoy the Holidays Despite Fibromyalgia

Living with fibromyalgia may change your holidays, but you can still have enjoyable and...

How to Enjoy the Holidays Despite Fibromyalgia

Living with fibromyalgia may change your holidays, but you can still have enjoyable and...
read article >

When you have fibromyalgia, it can be challenging to get a good night’s sleep. Insomnia, sleep...

When you have fibromyalgia, it can be challenging to get a good night’s sleep. Insomnia, sleep...
read article >

You’ve Just Been Diagnosed With Fibromyalgia. Now What?

We all respond differently to information about our health. After learning you have fibromyalgia,...

You’ve Just Been Diagnosed With Fibromyalgia. Now What?

We all respond differently to information about our health. After learning you have fibromyalgia,...
read article >

Members of MyFibroTeam search for ways to increase their energy as they battle fatigue, one of...

Members of MyFibroTeam search for ways to increase their energy as they battle fatigue, one of...
read article >